A downloadable game for Windows and macOS

"Why is it we forget our dreams when we wake up? I don’t suppose we’ll ever know."

Lose yourself in a world out of time and space, immersed in an original soundtrack that adapts to your actions. There is no timer, no hurry and no danger - only a world full of puzzle and colour to explore and reconnect.

Inspired by, and in the style of The Witness, The First Tree and Obduction, LINK is a narrative puzzle game with exploration, and has a playtime of 40-60 minutes.

Featuring the voice of Kylie Bates

Is there any rhyme or reason to which of the many wall symbols you're supposed to input into the buttons? Or do you have to just try them out one by one?

There is definitely rhyme and reason. Look for a clue.

great game! I thought the visuals and music are beautiful - puzzles are tricky but rewarding. I didn't really understand the story completely but it had a really nice atmosphere.

I have mixed feelings about this game.

On one hand, the puzzles are nice and not obvious (at least for me), the voice acting is great and the music creates a nice ambience.

On the other hand, there are just two puzzles. It took me a long time to realize what the clues for them were, but once you solve them, this becomes a game of pushing buttons. And the buttons are... annoying. They were particularly annoying to me, because I didn't manage to solve the puzzles until my third run of the game, which meant I had to play through the intro three times, as it seems to be non-skippable and there is no save feature. And the intro and the starting area have a lot of buttons. What makes it even more annoying is that most of the buttons make absolutely no in-game sense, since they are on one cable within an arm's reach of each other.

It certainly seems that for a world this size there could be more puzzles (one per memory piece or so), including  something exploration-based, and less buttons.

Great game - the clues to the puzzles felt tough but fair, I only wish there were more of them! The music added a lot to the mood of the game, although I did find myself turning up the volume to hear the narration, then back down again when the music picked up.

I did want to point out a couple of places where I broke things and had to restart the game:

1) At one point I closed the sliding gate (the one in the corner where you start out) on myself out of frustration and ended up stuck, unable to see anything and unable to find or interact with the switch to open the gate back up.

Overall, it was a short but sweet experience! Keep making puzzles!

NOTE: While I don't go into detail about solutions, you might not want to read this comment before playing since it could spoil the puzzles somewhat.

Played with a friend for about an hour and a half. We couldn't figure out the thing with the planets, think we got everything else though.

I like the aesthetic. The music is nice and the environment is fairly interesting. I do wish the lighting was a little better in places though, sometimes the light sources are just invisible spots in the middle of the room, even though there are candles and such all over the place.

It would be nice to explain the controls better. There's a more detailed list here on the Itch page but in-game it doesn't mention that there's a run button, or that WASD works, or that the middle mouse button moves backwards. The walking speed is really slow so knowing about the run button seems pretty essential. I actually think the running speed should be faster than it is. We spent a lot of time wandering around and the slow pace becomes annoying, especially for the long catwalks.

It's a little hard to tell which dots are which if you get what I mean. At first I thought I was wrong about the whole thing when actually I just clicked the wrong dot.

The narration is well voiced, but it's a little hard to hear because they're so quiet. Would be nice to either have separate volume sliders or the option to turn on captions.

The animation when you pick up a piece was cool the first time but it starts to feel drawn out after a while. I guess you don't have to wait around for it but it sorta feels like the game wants me to.

Generally I'd say I liked the aesthetic and the puzzles but the controls were somewhat frustrating and the whole thing was paced very slowly. If I could move a little faster, hit switches that are a little farther away, etc. it would go a long way to improving the overall experience. Definitely some cool stuff in here though.

Thank you for playing, and for taking the time to review! It's really helpful to know how the controls worked for you (and where they didn't!) So thanks again! 😁 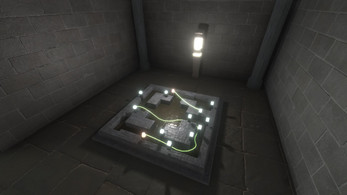 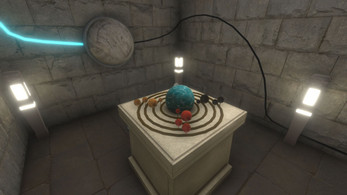